The original Iowa State barn was built in 1860, along with the Farm House, as the first two buildings on the new campus following establishment of the College and Model Farm site. 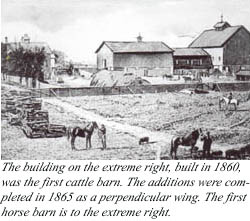 The architect for both structures was Milens Burt of Muscatine, Iowa. The barn, of frame construction, measured 42 x 60 feet and provided feed storage and housing for cattle. In 1865 additions were proposed and over a period from 1869 to 1871 additions included a lean-to on three sides, the addition of a corncrib, a henhouse, a root cellar, and stables for horses. In 1871 the barn was declared inadequate and an additional barn was planned and built but was still considered a part of the cattle barn. While records are not clear as to completion date it was probably in 1874 since funds were made available in the preceding year. Descriptions of the new barn indicated a structure 54 x 70 feet with a stone basement and foundation, wood siding, and pine shingles. The basement level included space for 48 head of cattle and the necessary breeding and calf pens along with root storage for 4,000 bushels. The middle level was a drive-through design with 16-foot alley. This level had a number of sections dedicated to equipment storage, a room for the herdsman, large grain storage bins, and breeding stalls. The upper part of the building included storage for 150 tons of hay and straw. Chutes were constructed to direct bales from the mow to the basement below where the animals were housed. A wagon shed was built as an attachment to the new barn and connected the new areas with the old. Records indicate that the building was completed in a good and workmanlike manner at a cost of $4916.44. Based on later photographs of the overall structure the new barn was expanded to encompass the wagon shed. This provided a single wing of equal height and width with perpendicular connection to the old barn. This modification, however, is not noted in official records.

The building came to be known as the Beef Barn but was designated in University documents only as Cattle Barn. The cattle barns in use at the time were known as Old and New Cattle Barns both of which were razed about three years after this barn was completed. Previous cattle barns housed both beef and dairy cattle; however, the new Dairy Barn was completed on Mortensen Road in 1908 and the dairy animals relocated at that time. Records do not reveal whether the barn ever served as a site for dairy production. However, the west wing did contain a number of stanchions of a type that could be used for milking. These stalls and stanchions were used for many years for Holstein nurse cows for steers being fitted in the Beef Barn for exhibition at the International Livestock Show in Chicago. Three International grand champion steers were developed in the facility. 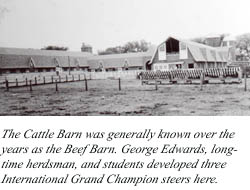 The barn, eventually to be a U-shape building, was constructed in phases. Design was by Proudfoot, Bird and Rawson of Des Moines and construction was by Netcott Brothers. The east wing was constructed first, then the west wing, and finally the two were connected with a center section. The two wings were approximately 32 x 168 feet and the connecting unit was 80 feet long and included a handsome, domed drive-through opening to access the courtyard and to deliver silage and grain to the outside feed bunks. The barn represented the classical gambrel roof design with architecturally interesting gables built into the roof with windows for light and ventilation. In addition to the cooling effect of ventilation for the building, it was critically important for completion of the drying process for newly stored hay. Many barns have been destroyed by fires started by spontaneous combustion of hay materials stored with excess moisture.

The unit included loose housing for cows in the winter, calving pens, a number of stalls for groups of growing animals, box stalls for bulls, and numerous box stalls for one or two animals being developed for use in classes, student activities, and for showing. Feed storage was provided in three upright silos and a haymow above the entire lower level. The office area included rooms for students who worked at the barn. In 1931, lightning ignited a fire and the entire building was destroyed. It was replaced immediately. In 1958 the entire roof of the east wing was destroyed by fire and replaced the following year. The barn was razed in sections in the late 1980s to provide space for the National Soil Tilth Laboratory and the Linear Accelerator addition to the Meat Laboratory along with additional parking space. The National Swine Research and Information Center now occupies a part of the site.

In the late 1800s and early 1900s new methods and materials for constructing silos were being developed. The beef barn included three silos. The design of the original silos and construction materials is not documented; however, it is clear from examining photographs that the University was building silos of all different types during this period. Farmers were adopting ensiling as a method for preserving and storing corn and to some extent grasses and legumes. The numerous types of silos built on campus probably had some value in demonstrating design, materials, and management of the various types of units. The silos at the Beef Barn after the 1931 fire included two constructed of hollow clay tile and one (probably constructed later) was built with concrete staves, a type of silo block that remains in widespread use today. During the early years of the 20th century a lot of effort was invested in the design of silo building blocks. Matthew Leander King was a proponent for the use of hollow clay tile in building silos and other farm structures during this period. His position at Iowa State College was Experimentalist in Agricultural Engineering, Iowa Agricultural Experiment Station. King's paper, Hollow Clay Blocks for Farm Buildings (published in Transactions of the American Society of Agricultural Engineers in, Volume IV, December, 1910), attests to his strong support for use of such blocks for all types of farm buildings. Over the years numerous Iowa State barns, silos, and grain storage facilities were built on campus utilizing hollow clay tile blocks. King was active in developing alternate designs for masonry blocks during these years and in 1920 was issued a patent for a new hollow clay tile design (U.S. Patent No. 1350656, dated August 24, 1920). Supporting materials for the patent application suggested that advantages of the King design were related to more rapid masonry construction that required less labor and less mortar to join the blocks. The patented blocks were for masonry construction generally and not designed exclusively for silos. According to some news accounts, the first silo utilizing these patented blocks was constructed on the Iowa State campus. The site of this particular silo does not appear in University records. During the 1920s, the use of clay tile for silos gave way to use of large, elongated, vertically-placed concrete staves (a type of block that some farmers remember being used prior to World War II) with specialized joint design to accommodate silos of any diameter.