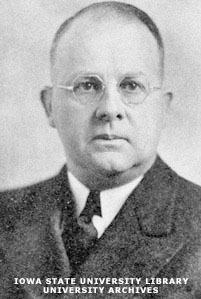 animal husbandry in 1916. He served the university for 34 years as professor of animal husbandry and research professor of animal production. His particular interest was horses. In charge of horse work at Iowa Agricultural College, Caine was one of the world's foremost authorities on horses, and a well-known figure in the judging arena in the state as well as nationally, including the National Belgian Horse Show, the Ak-Sar-Ben Show, and the International Live Stock Exposition, where he judged the Percheron and Belgian classes. W. H. Pew, head of the animal husbandry department (1912-1918), sometimes served as referee in these events, according to archival information.

As one of the most popular faculty members with students, "A. B." served as faculty advisor for Agricultural Student Council for 30 years, for Block and Bridle Club for many years, and his social fraternity Phi Delta Theta over 27 years. At one time, he escorted a group of twenty-six Iowa State college students taking farm crops and animal husbandry courses on a one-month tour of agricultural, beef and dairy sections in twelve states. The party camped at night and was royally entered on various college campuses and at other places along the route, particularly in Texas. From 1920 until 1945 he was chairman of visiting delegations on the campus andshowed thousands of people about the campus, sometimes having up to 800 visitors in a single day, he was quoted as saying.

Caine helped organize the Iowa Horse and Pony Breeders Association and served as secretary for many years. He often went throughout the state, often in company with Wayne Dinsmore of Chicago, secretary of the Horse and Mule Breeders Association of America, visiting prominent horse breeders and inspecting farming operations from a standpoint of hitches and power management.

He married Anna K. Taylor at Salt Lake City in 1918. They had three children, Richard T., Barbara Anne, and Alfred B., Jr. Professor Caine died unexpectedly in 1950. He was honored at the 1951 VEISHEA Horse Show with the inauguration of the A. B. Caine Memorial Classes. As it happened by lot, the first memorial class was the draft horse single hitch, a most appropriate event, as Caine spent spent of his time in working with the heavy breeds.