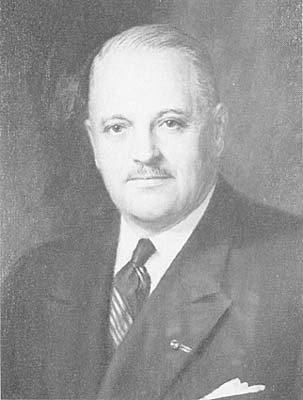 Edward N. Wentworth was born at Dover, New Hampshire. He acquired his taste for western travel when he was less than five years old. At that time his father took him on a trip from their home in New Englad to Albany, New York. Young Edward was told that Niagara Falls was even farther west than Albany, but was convinced that Niagara was the end of the world. There just couldn't be anything farther west than that!

Sometime later the family moved to Iowa and lived at Marshalltown and State Center, where young Edward was graduated from State Center high school. Wentworth received his BS in animal husbandry at Iowa State College in 1903 and his MS degree in 1909. When he was a senior in animal husbandry, he submitted a prize song which was to be adopted as the official alma mater, "State College of Iowa,"1 for which he received a cash award. Possessed with a fine tenor voice, he entertained frequently at dinners and parties while on campus as a student and a faculty member. Wentworth did additional graduate work at Iowa State, Cornell, Kansas State University and Harvard University (1912).

During World War I, he served overseas as Captain of Field Artillery, rising to the rank of Colonel. Following the Armistice, he participated in formation of the AEF school in France. He was decorated by the French Minister of Agriculture with Officier de Merite Agricole (1919).

In 1919, he joined Armour and Company in the Public Relations Department. Beginning in 1920, he began a long association with the International Live Stock Exposition as ringmaster. His lifetime was filled with judging at livestock shows and fairs throughout the country. A dashing and commanding figure at 310 pounds, he was acquainted with most of the leading figures in agriculture from his college days forward. He later wrote:

One of the most interesting and philosophical experiences I have had came from Mr. R. F. Ogilvie, who was the secretary of the Clydesdale Horse Association and one of the founders of the International Live Stock Exposition. About two months after I had gone out to Kansas as professor of animal breeding, I was offered the job as editor of a new magazine, The Agricultural Digest. I wrote Mr. Ogilvie for advice, pointing out that I had just gone to Kansas but the magazine job was offering more than twice the salary. I made quite a talk on a page and a half of typewritten letter. He took a pencil and wrote on the bottom, "I never saw a sow that ran from trough to trough looking for the biggest ear that ever got fat." That helped me to be conservative the rest of my life.

In 1919 Wentworth joined Armour and Company and in 1923 he became director of the Livestock Bureau, serving for 35 years until 1954. Col. and Mrs. Wentworth made their home in Chesterton, Indiana, with a 1,000-volume library, original paintings and etchings on the walls, and statuettes above the fireplace, all with a western theme. Each piece of art had to pass the test for accuracy, as well as for artistic appeal in order for Wentworth to consider the piece worth buying. In particular, Wentworth was fond of the work of Ed Borein and owned fifteen of his etchings. Borein was a real cowboy who taught himself to be an artist, the colonel pointed out in an interview.2

Notice these two etchings of Longhorn cattle. One is the California Longhorn, wider between the eyes, with a 'dished' face. The other is the Texas variety, with a longer face, more like a horse's head.

Wentworth was an accomplished speaker and lecturer and made talks in practically every state of the Union and several foreign countries. As an avid art collector and authority on the old West, he was active in many professional, historical and military societies, and was a distinguished historian of American livestock.3 Writing for numerous agricultural and historical journals, he also wrote numerous books including The Portrait Gallery of the Saddle and Sirloin Club (1920) and America's Sheep Trails (1948). Colonel Wentworth's own portrait was hung at the Saddle and Sirloin Club in 1940. He also served the club as chairman of its art committee for several years after 1923. Wentworth was made Honorary American Farmer (F.F.A.) in 1948, and was given an Honorary Doctor of Agriculture degree at Iowa State College in 1951.

With Charles Wayland Towne, his cousin, Wentworth co-authored many well-received books , including Cattle and Men (1955), Pigs, from Cave to Corn Belt (1950) andShepherd's Empire (drawings by Harold D. Bugbee) (1945). On this last work, Shepherd's Empire, a copy of the book at the Iowa State University Parks Library bears the inscription: "To Charles E. Friley with warm regards from the junior, but heavier, author. Edward N. Wentworth".