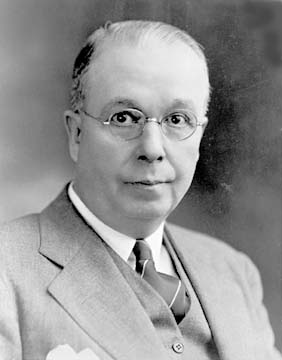 Kildee Hall on the Iowa State University (ISU) campus houses the Department of Animal Science. It was one of the first buildings named for a living great of ISU. It was dedicated June 3, 1966 with Dean Emeritus H. H. Kildee in attendance but seated out of the limelight, as was his nature throughout a very productive career. He nurtured what the brash Dean Curtiss planted. He developed ISC into a leadership role in scientific agriculture using great diplomacy. After two decades of prosperity, American agriculture in the early 1920's experienced a period of economic crisis. Emerging from World War I and the boom it generated, farmers soon found themselves confronted with a convergence of difficulties. Plummeting prices, declining purchasing power, stringent credit, increased taxes, mounting transportation costs, and a vanishing foreign market combined to visit upon the country's producers of food and fiber problems which they little understood and with which they were ill-prepared to cope. Kildee served as department Head from 1918-1935. He was a most loved dean on this campus, in his state, and throughout the world. He listened, especially to his students.

Becker (1973), one of his many students (1916), quoted a statement made by the dean during the last laboratory of his course on dairy cattle breeds. The students toured four dairy herds and judged classes at each stop. Becker reports that the dean placed number 4 last for lack of certain characteristics. "The owner recognizes those points, but that animal may be better than most of you will ever own." As Becker commented, "That was a lesson in dairy type and in diplomacy."

Henry Herbert Kildee was born to a farm couple in Osage, IA, in 1884. He received his B.S. in 1908 after being high individual in the Intercollegiate Livestock Judging Contest at the International Livestock Exposition in Chicago, scoring more points on all classes of animals in the Student's Judging Contest and earning the medal that year. He joined the staff of ISC in 1909 and the following year was made head of dairy husbandry. In 1916 he went to the University of Minnesota as head of dairy industries, but he received his M.S. from ISC in 1917. He returned to ISC in 1918 as head of animal husbandry and a year later was also named vice-dean of agriculture for resident instruction. In 1933, he was named dean of agriculture and served in that position until his retirement in 1949. Students, dairy cattle breeders, and judging of most species of livestock were his loves, to which he devoted his keen insights and patient time.

In 1907, he was involved in a grading-up study at the new dairy barn (1905) that used purebred bulls of the Holstein, Guernsey and Jersey breeds. This study appeared in Bulletin 165 of the Iowa Agricultural Experiment Station. This investigation inspired wide improvement of dairy cattle. He was author of numerous other bulletins early in his career.

His interest in students and their education was recognized by his colleagues in the American Society of Animal Production. He published a paper in 1924 titled "Planning the animal husbandry curriculum," another in 1929 titled "Value of personal contact between instructor and student," and one in 1934 titled "Suggested introductory course in animal husbandry." His president's address to the ASAP in 1934, published in 1935, was titled "Animal husbandry's responsibility in land use planning." This paper foretold things to come and showed Kildee's great insight into the problems of agriculture in general.

Great contributions were made by Dean Kildee to the entire dairy industry. In 1922 he was a member of the committee that developed the True Type Holstein that later were made into metal models and loaned to the land-grant colleges. In 1932, he was a member of the Type Classification committee that set up the herd classification systems for dairy type in the breeds. The standardized score card, first introduced by John A. Craig, was pushed by the dean. He helped quantify type so that type, form, and function could be improved by the dairy industry. He also worked with the Angus breed. His judging of dairy cattle and his involvement in type classification led in 1949 to the formation of the Dairy Shrine Club. What crystallized its formation was the creation of a graduate student scholarship in honor of Dean Kildee upon his retirement as dean in 1949. His portrait was the first to hang in the Dairy Shrine Club. As Becker (1973) put it, "He guided and inspired students and breeders of dairy cattle, judged shows, served on committees of true type, unified score cards, and type classification, and was a type classifier with Holsteins and Jerseys."

He was a director of the International Livestock Exposition from 1947 on and was vice president (1955-57) and president (1957-64). He became chairman of the board in 1964 and chairman emeritus in 1968, when his portrait was hung in the Saddle and Sirloin Club. As market decentralization occurred, ending with the closing of the International in 1975, the Dean would have shaken his head.

The Dean was an unusual stock judge in that he judged every breed of dairy and beef cattle, swine, and draft horses. He judged every major show in the United States and many abroad. As Darlow (1958) so aptly put it, "Each of these men who walked in the classroom arena, for all the world to see, has proven to be a master teacher." And Dean Kildee was a master teacher.

The dean never lived in the Farmhouse on the campus. He and his family lived in a large, gray frame house on campus directly opposite the Knoll, the president's residence. His beautiful, gracious wife, Ruth, preceded him in death in 1958. They had two daughters, Regina and Kathleen.

After retirement, the dean was active in international affairs. He participated on missions to South America as a seminar leader and technical advisor. Costa Rica made him an honorary citizen and he twice received national honors in Columbia. During this time he always found time to visit with George Edwards, the beef herdsman, at the beef barn.

In 1940, he was awarded an honorary degree from the University of North Dakota and one from ISU in 1958. He died quietly after a prolonged illness in 1973. I remember the day Dr. Jay Lush came in with the news of Kildee's death. With tears in his eyes he said simply that the dean had been a friend and cherished colleague. He was but one of myriad students and colleagues who were truly inspired by this gentleman of the livestock industry with cane in hand. The faculty in Kildee Hall live his tradition.