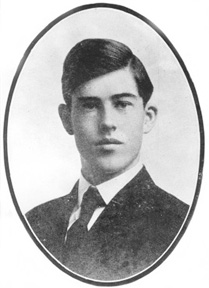 Henry Agard Wallace, agricultural scientist, editor, cabinet official, vice-president, and presidential candidate, was born October 7, 1888, in a modest frame house on an isolated farm in Adair County, Iowa, to Henry Cantwell (Harry) and (Carrie) May (Brodhead) Wallace, she barely twenty-one years old and her husband only a year older. Henry A., as he was called in Iowa, was born in the evening, and his mother had spent the afternoon in her garden. This was the way of birth in Iowa, as normal as husking corn or rising at dawn.

Yet nothing about the Wallace family ever quite fit the norm. The Wallaces were different. They were part of, but apart from, the general husbandry of Iowa. Unlike most farmers of the day, Harry had been to college and was a believer in "book farming," the application of scientific principles to agriculture. His young wife also had been to college and was trained in music and art. Like most Iowa farmhouses, Harry and May Wallace's home had no toilet, electricity, furnace, telephone or running water. A trip to town was an event. But it did have books, lots of them, and a piano, and it was brimming with ideas.

To the eternal consternation of readers in trying to keep the family straight with so many Henrys, May Wallace did not completely name her son according to the tradition established as the firstborn. She went back to her family name of "Agard," an English name. Arthur Agard was a common ancestor of the Wallace's and Winston Churchill and FDR! She was proud of her heritage and wished to keep that name alive. Henry Agard was the third Henry, his father being Henry Cantwell, who middle name was the family name of his mother, Ann Cantwell, "Uncle" Henry Wallace's wife.

His father and grandfather, also named Henry Wallace and widely and affectionately known as "Uncle Henry" owned and edited Wallaces' Farmer, a prestigious Iowa farming journal, and achieved prominence as agricultural leaders. The family-owned newspaper, Wallaces'  Farmer, became one ofâ€‹ the most influential and prosperous journals in the Midwest soon after it began publication in 1895. 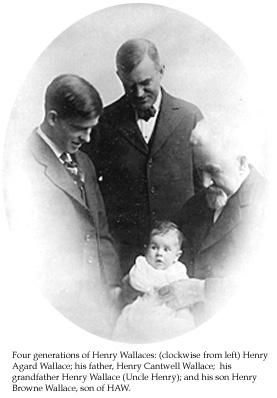 Henry A. revered his grandfather (1843-1916), who instilled in him the values and convictions he preached as editor of Wallaces' Farmer; the superior virtue of agricultural civilization, the fundamental wisdom of Christian morality as a guide for daily living, the inherent good sense and dignity of common folk, and the need for cooperation and understanding among all peoples.

His father was also on the staff of Iowa State College for a few years as well as serving as secretary of agriculture under Warren G. Harding. Even as a youngster, Wallace displayed a keen, inquisitive and serious intellect. It was during this time while his father taught in Ames (ca 1893) that Henry A. became friendly with George Washington Carver, to whom he attributed his love for plants, and with whom he maintained a lasting friendship and even visited Carver at Tuskegee Institute as Vice President. Wallace attended Iowa State College and graduated in 1910 at the age of 22 in animal husbandry, when he joined the family journal, Wallaces' Farmer, as associate editor. In 1914, he married Ilo Browne on May 20, 1914; they had three children. Henry A. earned an M.S. degree in animal science in 1920. His first significant achievement was the derivation of statistical correlations to determine a fair price level for farmers raising hogs. He also experimented with various strains of corn and produced the first hybrid corn suitable for commercial use.

His father, Henry Cantwell, went to Washington in 1921 as Secretary of Agriculture, dying unexpectedly in 1924. Henry Agard became editor of the family newspaper, a rich editorial property that emphasized good farming and conservation. During the next twenty-three years he made his reputation as editor, through developing strains of hybrid corn, and as founder of what is now Pioneer Hi-bred International, Inc., seed company. In 1931 the paper, overloaded with debt, passed out of family hands, leaving Henry without a job.

Midwestern farmers suffered hard times during the 1920's, and Wallace devoted his attention to seeking solutions for their most obvious problem: overproduction. He advised farmers to curtail output, suggesting that they treat Europe as if it "were located on another planet" and adjust production to meet domestic needs only. However, he got little support. He then began to advocate an export "dumping" plan that was introduced in Congress as the McNary-Haugen bill. He campaigned vigorously for the bill and was outraged when President Calvin Coolidge vetoed it twice. He was so angry that he abandoned his family's traditional Republicanism and supported Democrat Al Smith in the presidential election of 1928. By 1930 Wallace decided that the best way to reduce the agricultural surplus was to lower tariff barriers and increase the volume of world trade. He also backed a measure known as the voluntary domestic allotment plan, under which farmers would receive government payments for agreeing to restrict their production.

By that time, the Great Depression had begun, and the condition of farmers had deteriorated so seriously that Wallace feared that they might rise up in revolt. He believed that America's failure to assume responsible world leadership during the 1920's and its "selfish ignorance" in tariff and war-debt policies had led to the economic collapse that was engulfing the world. He had little confidence in President Herbert C. Hoover's ability to deal effectively with the depression, and after meeting Franklin D. Roosevelt in August 1932, he became his active backer. Wallace's support in the campaign and his prominence in agriculture led Roosevelt to appoint him secretary of agriculture. It is interesting to note that at the time, he was a registered Republican, an inheritance from his father and grandfather. Thus he began his political career at the top.

Washington had never seen anything quite like Henry A. Wallace during the New Deal's first, frenetic year. His breathtaking energy level, his extraordinary intellectual self-confidence and, especially, his zeal and sense of purpose seemed to let Wallace rise above his personal reticence. Aides learned he could be blunt and unyielding. In short, he blossomed. He preached the social gospel as surely as his grandfather had preached it from rural pulpits. His message was never one of partisan politics, but of morality and the common welfare.

Wallace believed that the Great Depression was a spiritual as well as an economic crisis. His religious views profoundly influenced his opinions about the causes of the depression and what was necessary to end it. His quest for eternal verities led him far beyond the bounds of conventional organized religion. He believed in the reality of revealed truth through mystical experiences. He believed that the economic crisis could be overcome only if Americans readjusted their attitudes by subordinating their selfish interests to the general welfare. The trials of the depression provided the opportunity for a spiritual reformation. If selfishness and greed gave way to a commitment to cooperation and social justice, the potential for economic, cultural, and spiritual fulfillment would be limitless.

Wallace's efforts to inspire a spiritual reformation inevitably proved futile, but the policies he inaugurated as secretary of agriculture were more successful. Support payments for crop control, soil conservation, food stamp distribution, assistance for tenant farmers, and government-operated warehouses for storing surpluses helped alleviate, though they did not eliminate, the distress of American farmers during the Great Depression. Those programs aroused bitter protests from opponents of government planning and massive intervention in the economy, but they provided the basis for dealing with agricultural problems for decades to come. In his two terms as secretary of agriculture, throughout the Great Depression, 1933-1941, he was responsible for the administration of the Agricultural Adjustment Acts and other relief measures for the nation's farmers.