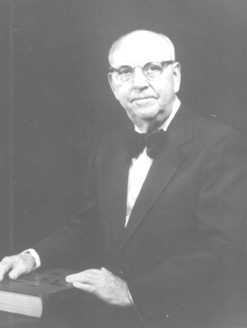 Some people's achievements cause them to become legends in their time, and the American Society of Animal Science has had its share, one of whom was Marion E. (Gene) Ensminger. "Doc E.," as he was affectionately called, dedicated his life to the extension of knowledge about animal agriculture, which he accomplished by writing 22 books and countless articles and by organizing and conducting a series of International Stockmen's Schools, and, later, International Ag-Tech Schools. Several of his books have been translated into foreign languages.

His preparation began early. His first paper was published in 1934, when he was the first manager of the Dixon Springs Experiment Station operated by the University of Illinois. Subsequently, he wrote over 500 journal papers, bulletins, and circulars and three syndicated agricultural columns. In 1937, he returned to university work, which he followed for 25 yr, at the University of Massachusetts, the University of Minnesota, and Washington State University (WSU). Moving with the times, Dr. Ensminger presided over the renaming of his department at WSU, from Animal Husbandry to Animal Science. He initiated a doctoral program in the animal sciences at WSU and also began an ambitious program of extension, the International Stockmen's School, which he operated from Pullman for 20 yr and later moved to Arizona and Texas.

Dr. Ensminger maintained close ties to the livestock industries and was widely sought as a consultant. He served on the board of the American Southdown Breeders' Association from 1949 to 1962, and, while at WSU, he developed Hilltop Stables, which was recognized as one of the best light-horse facilities in the nation. This was done entirely through gift and grant funds, something that was unusual at the time but is now becoming commonplace.

His consultancies led to his election as the first president of the American Society of Agricultural Consultants, which honored him with its Appreciation Award in 1977. They also led to his appointment to the National Board of Field Advisors to the Small Business Administration in Washington, DC.

Perhaps the brightest jewel in his crown was his organizing and conducting of scientific and cultural exchanges in technical agriculture, which began in 1966. These so-called ag-tech schools ultimately involved the Ensmingers in 70 countries, but emphasis was placed on work in China, Cuba, Russia, and the Ukraine. In China, he enrolled 560 agriculturists in schools held at Beijing, Huhehot, Wuhan, and Guilin. These were the first such efforts by foreigners in over 25 yr. Similarly, his schools in Cuba in 1995, attended by 493 in Camaguey and Havana, were the first in more than 30 yr. Ag-tech schools in Stavropol, Russia and Kiev in the Ukraine were held in 1995 under joint sponsorship by Iowa State University. The staff for these schools was drawn from five countries in addition to the United States, and the enrollees totaled 670.

Highly technical information at these schools was dispensed with a blend of efficiency and friendly informality. A stickler for punctuality, Dr. E. began each school program by vigorously ringing a large brass school bell. He signaled the close of each lecture with similar directness, and woe betide the instructor who let his classes drag on! At the close of his Russian schools, faculty and enrollees joined hands and sang "Auld Lang Syne," which had been translated into Russian for the occasion. His many friends will remember breakfasts at the Ensminger home before a day of meetings. Doc. E would announce these the night before: "Breakfast will be at 7 in the morning. Not 5 minutes before and not 5 minutes after. Seven." And so it was. He liked things to be on time.

An important avenue for his work, both in the United States and overseas, was the Agriservices Foundation, which Dr. Ensminger organized at Clovis, CA in 1964. The Foundation was governed by a board of 20 distinguished agriculturists, drawn from academia as well as production agriculture. Its stated objective was to foster and support programs of education, research, and development for the effective application of science and technology to the practice of agriculture for the benefit of mankind. Agriservices Foundation never received a penny of government money. It was largely supported by royalties from the sale of the Ensmingers' books in the United States. Any royalties on foreign sales were waived to ensure wider access to the books.

Dr. Ensminger had many ties to the American Society of Animal Science. He arranged for the design of the Society's logo, which is still in use, and he organized and raised funding for its first careers brochure. He served as president of the Society's Western Section in 1958 and was a member of the ASAS's Executive Committee and vice-president in 1959. He was honored with the Society's Distinguished Teaching Award in 1960 and was elected a Fellow in 1979. In 1996, he received the Bouffault International Animal Agriculture Award, for which the citation identified him as "one of the world's great humanitarians."

Dr. Ensminger's awards are too numerous to list in this brief sketch, but some seem particularly appropriate to his lifetime dedication to animal agriculture education. These include the People-to-People Appreciation Award in 1968; an Honorary Professorship at Wuhan University in 1984; a Gold Medal and Outstanding Achievement Award from the University of Minnesota in 1991; an Honorary Doctor of Laws degree from the University of the Ukraine in 1994, and an Honorary Doctor of Humane Letters degree from Iowa State University in 1996. Washington State University named its Ensminger Beef Cattle Research Center for him in 1984, and Iowa State University dedicated its Marion Eugene Ensminger and Audrey Helen Ensminger International Room, in Kildee Hall, in the fall of 1998. He was proud to have his portrait in oils hung in the famed Saddle and Sirloin Club collection, in Lexington, KY in 1985, because he felt it recognized the application of academic learning in agricultural practice.

Truly, Gene Ensminger's visions had broad horizons, and he like to observe that the world was his classroom. There are not many who can be said to have made a measurable difference in this world, but he was one of them. Through his efforts to improve practices of food production, he has improved the quality of the lives of literally millions of people, and on the precept that "a hungry man listens not to reason," he contributed significantly to world peace. Not bad, for a Missouri farm boy.