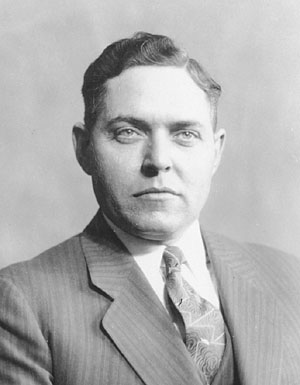 Maurice David Helser was born in Thornville, Ohio, March 29, 1890, the son of David M. and Emma. S. Helser and was reared on a farm. After graduation from high school in 1909 he taught at a country school and then entered The Ohio State University in an agricultural course, receiving a B.S.A. degree in 1914.

He served as supervisor of the carcass division of the International Live Stock Exposition at Chicago from 1921 to 1931, and as assistant superintendent of the sheep department at the Iowa State Fair from 1917 to 1932. Meat judging began in 1926 and he took Iowa State's first undergraduate meats judging team to the International Live Stock Exposition. He was to serve as its coach for six years.

In 1931, Iowa State's President R. M. Hughes was looking for a man who could take from the president's shoulders some of the many duties involved in looking after the welfare of undergraduates. A canvass of the faculty pointed to Helser as a great teacher and a man who enjoyed excellent relations with students. Helser was appointed Director of Personnel, and Helser accepted the new role on a trial basis. So successful was he in this responsibility that he was named Dean of the Junior College in 1933, also dealing with students. He held these two titles until July 1955 when he reached 65, the mandatory age of retirement at that time. However, at the time President James H. Hilton was proposing a reorganization plan, to abolish offices of Dean of the Junior College and Director of Personnel, and to create a new office, Student Affairs. Hilton requested Helser to become the first Director of Student Affairs, and Dean Helser accepted, and continued in this position to his untimely death April 26, 1956.

Dean Helser was a sincerely religious man and served for more than a quarter of a century as "temporary" pastor of a small church at Jordan, Iowa, a community west of Ames about five mile, totally destroyed in a summer tornado some years later. In August 1930 this small rural church, unable to support a full-time pastor and unable to locate a pastor whose services they might share with another church, appealed to Helser. He agreed to give the message from the pulpit one Sunday morning. The worshippers marveled at his powerful lay preaching and asked him to serve as their pastor for six weeks. For the next 25 years they kept renewing their request, and he did so until illness prevented him from doing so. He also taught a Sunday school class at his own church in Ames for 33 years, which meant a close schedule each Sunday morning!

By far his greatest contribution came in his intimate and understanding association with thousands of Iowa State College students to whom he was counselor and personal advisor, as well as a warm and kind friend. When students would return to campus for class reunions 30 years later, they always made a point to see Dean Helser.

In 1914 he was married in Columbus, Ohio, Elizabeth Stevens of Linnville, Ohio. They had two daughters, Carolyn Jane and Margaret Elizabeth.