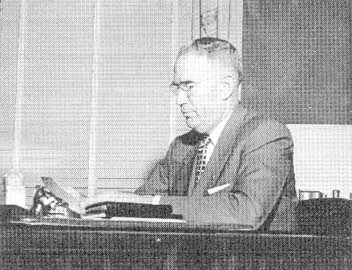 Oliver Siralvo Willham called everyone by name across the campus of Oklahoma State and wherever they met. As vice-dean of agriculture from 1939 to 1950, he reviewed all students' records before he visited and signed their cards. From then on he called them by name, knew where they came from, and asked about their parents. This personal effort on his part endeared him to students, farm families, and the powerful of Oklahoma as his commencement addresses echoed in gymnasiums of small towns throughout the state. His high school son asked at lunch one day to go to Texas A&M so he could wear the boots. Oliver rose from his chair, pointed his finger, and said, "I've been all over Oklahoma visiting with parents and prospective students urging them to come to Oklahoma A&M College (OAMC). If it is good enough for them it is good enough for you!" His son never asked again. The students knew they had a friend in the president of Oklahoma State University from 1952 to 1966.

He was born June 26, 1901, in Clearwater, KS to George B. and Ida (Barnes) Willham. In 1906, they secured 64.8 ha (160 acres) in the Big Pasture Opening near Randlett, OK, and he grew up on their cotton farm. Across the Red River, the Burkburnett oil boom gave his mother the lease money for their children's college education. Oliver skipped a grade, so he and his sister could go to OAMC together. His father went to Stillwater, met C. P. "Hog" Thompson in a grocery store, and secured rooms for them in Thompson's home. He was on W. L. Blizzard's livestock judging team and graduated with honors from OAMC in Animal Husbandry in 1923.

Willham became professor and head of Animal Husbandry at Panhandle A&M College (PAMC) in Goodwell, OK from 1923 to 1934, was made dean of men in 1927, and became vice-president in 1929. The panhandle of Oklahoma was isolated from the rest of the state. The farmers and ranchers of "no-man's land" were a tightly knit group, as was the small faculty at Goodwell. Together they weathered the dust bowl and the Depression by helping each other. Oliver spent his summers at Iowa State College, baby-sat fraternities for a room, and, in 1927, received his M.S. from H. H. Kildee, who later became dean at Iowa State. On August 4, 1928, he married a faculty member, Susan E. Hurt (B.A., Drury, and M.S., Columbia, NY), who was dean of women and to whom the 1928 yearbook was dedicated. The family, with their only child (1932), secured a research associate position to completed Oliver's Ph.D. with J. L. Lush in animal breeding, and they moved to Ames for the 1934-35 academic year.

His thesis was on the genetic history of Hereford cattle. Pedigree studies were cheap - a set of herd books and a coin to flip for which lineage to trace in the 10-yr samples - and this was Lush's real forte until money for animal research became available around 1937. From Henry A. Wallace's 1936 Yearbook of Agriculture, urging cooperation in breeding research, the Regional Swine Breeding Laboratory (RSBL) was born. Dr. W. A. "Bill" Craft left OAMC, became director, and was located at Iowa State. Craft's position was the opening filled by Oliver in 1935. He was associate professor of Animal Husbandry, taught numerous classes, and was in charge of the swine-breeding project, a contributor to the RSBL. He and Craft published their findings. Under W. L. Bilizzard's direction, Oliver learned how to surround himself with young, competent, and aggressive people as Blizzard had done at OAMC in putting together one of the best, but underpaid, faculties of animal husbandry in both basic and applied research and in undergraduate teaching.

In 1939, Blizzard became dean of agriculture and took Oliver with him as vice dean of agriculture in charge of resident instruction. During World War II, he took on the swine breeding project in Dr. Whatley's absence. He and his son collected records on Saturdays. Oliver corresponded with his students during the war and welcomed them home at its end.

The president of OAMC, Henry G. Bennett, was selected in late 1950 by President Truman to head the Technical Cooperative Administration Program, called the Point 4 program, to help 60 underdeveloped countries with one billion inhabitants. In 1951, Bennett selected Oliver to be the executive vice president at OAMC. He had visited with Oliver at PAMC and respected his forthright honesty, integrity, and ability, knowing Oliver was one who would give him his presidency back. Unfortunately, Bennett and his wife were killed in a plane crash in Tehran, Iran, on December 22, 1951. Bennett was president for 23-1/2 years. The Board of Regents unanimously elected Oliver to be the 15th president on January 17, 1952. He was the first alumnus to serve in that post.

Willham approached the opportunity with dispatch and characteristic vigor. In September of 1952, he noted that OAMC operated with insufficient funding to deal with the increasing enrollment and especially low faculty salaries, which he considered a priority. Then the bombshell exploded soon after he moved to the president's office: The National Collegiate Association (NCA) notified OAMC that they were dropping accreditation effective July 1, 1953. Oliver held them in abeyance with his assurance to comply, and on June 26, his birthday, NCA withdrew the notice and continued the accreditation.

His inauguration was held at the college auditorium on May 8, 1953. His wife and son drove over as the library carillons played. It was an emotional event for the family, filled with apprehension, pride, and confidence. The apprehension was unnecessary; the Cotton County man successfully worked with the state and federal legislatures to obtain the funding to meet the building and program needs of the university - over $50 million! Oliver did not promote the cause of OAMC alone. The entire system in Oklahoma was included in his tireless work with legislators, and Carl Albert, Speaker of the House of Representatives in Washington, D.C., read into the congressional record on his death in 1974 an appreciation for a true educator and friend of the people.

In 1953, Willham appointed Al Darlow as vice president of agriculture and authorized the formation of the Faculty Council, giving the faculty a real say in campus affairs. He replaced many deans with more vigorous and innovative administrators.

In 1954, the Emperor of Ethiopia, Haile Salassie, visited the campus in appreciation of the efforts of the OAMC Ethiopian project to modernize that country's educational system. Stillwater was enamored! Willham's style was open to all. In 1956, a computation center was opened, just what you'd expect from a quantitative animal breeder.

The year 1957 was a red-letter year. The 26th Oklahoma legislature changed the name from Oklahoma A&M College to Oklahoma State University (OSU) on the 50th anniversary of Oklahoma statehood. With help from the University of Oklahoma, OSU joined the Big 8 athletic conference, a grant was garnered for the first atomic reactor in the Southwest, and the first academic vice president was appointed.

With Al Darlow as chair, a committee of the OSU Alumni Association studied the potential for an OSU Development Foundation, which was established in 1961. This foundation solicited funds from gifts to help OSU achieve greater stature. All along, faculty numbers and salaries were increased. Student numbers went from 8,236 to 15,079 during Willham's tenure.

Some called Oliver "Jolly Ollie." As a compliment or otherwise, it illustrated his commitment to stripping away formality and bringing out the best in people. His faculty was allowed to create, dream, and exercise their academic freedom. The academic community some called the "Princeton on the Prairie" (same orange and black colors) thrived, giving the students of Oklahoma a genuine opportunity to obtain a liberal education.

Oliver understood that the regents hired him to run the University - all 40 million dollars of it. And he went on the line for his faculty when the regents wanted to dictate personnel matters. They did not, he did. He hired the deans and then the department heads and faculty. He was proud and fiercely supportive of his administrators.

Many honors came to Willham throughout his career, including election to the Oklahoma Hall of Fame, OSU Alumni Hall of Fame, the Distinguished Service Award of OSU, the University of Oklahoma Distinguished Service Citation, and the Iowa State University Outstanding Alumnus Award, to name a few. He served on several boards, including the Federal Reserve Board of Kansas City. He was a leader in the First Presbyterian Church, where he was a deacon, trustee, and elder. He was a 33 degree Scottish Rite Mason and Past Grand Master.

He presided over commencement in his 14 years and signed every diploma. At his last, he gave the commencement address and said, "True happiness can only be had when we use our talents and knowledge to serve others." Oklahoma State University placed emphasis upon the individual student and faculty, a hallmark of a member of the American Society of Animal Science since the days of the meetings in the old Sherman House in the Chicago Loop at Thanksgiving time.

Oliver was a leader. He made decisions, most in shades of gray, as he had learned on Blizzard's judging team, and justified them to his faculty, students, and the state. He learned by conversing, but he had no really close friends. Instead, he counted everyone as his friend. He was honest and trustworthy in his dealings and truly dedicated his life to the pursuit of excellence in higher education, especially OSU. It was not an easy job, and he advised his son to pursue a professional career.

He died on September 29, 1974, after a long bout with cancer. It was a distinct honor for his son to be asked to prepare this biography. Oliver's wife, Susan, died in 1968. He has two grandchildren, Karen of Hooker, OK, living out in his own "no man's land," and Oliver Lee, an orthodontist in Des Moines, IA. Two great-grandchildren, Audrey and Travis Conley, live in the panhandle of his beloved Oklahoma.