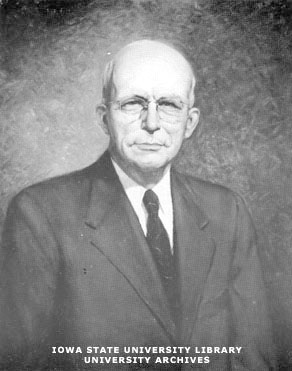 Phineas Stephens Shearer was professor and head of the Animal Husbandry Department at Iowa State University and a famous and active livestock judge. Born in Marshall County at Melbourne, Iowa in 1889, he earned his BS degree from Iowa State in 1912 and his MS from Wyoming in 1932. After one year at Nebraska he joined the faculty at Iowa State in 1913 and completed his active service there. In 1935, he was appointed head of the department. He served as President of the American Society of Animal Production (now American Society of Animal Science) in 1950. His portrait was hung at the Saddle and Sirloin Club in 1953. (A copy of this portrait hangs in Kildee Hall.) Shearer was made a fellow in the American Society of Animal Science in 1957 and a member of the Block & Bridle Hall of Fame in 1974-75. He had judged livestock at numerous fairs and expositions, and was advisor to the American Feed Manufacturers Association, 1940-43.

Many former students went on to work with him in the department. Professors A. L. Anderson, D. V. Catron, C. Y. Cannon, Vern H. Kerchberger, E. N. Harmon, C. C. Culbertson, Roy Kottman, and W. F. LaGrange are included in the group that took graduate or undergraduate work or both at Iowa State.

As an undergraduate, Shearer was active on the 1910 livestock judging team that placed first at the American Royal in Kansas City. He was also active in student newspaper and yearbook and was junior class president.

On his return to Ames to serve as an instructor in the Department of Animal Husbandry, he also did graduate work. It was during this time that he and C. N. Arnett, an instructor in livestock management, conceived the idea of making campus livestock classes competitive. They formed the first stock show, which is now known as the "Little International" in which animal husbandry students fit and show college-owned livestock. From 1919-1934, he served as coach of the livestock judging team, during which period Iowa State's team placed first three times at the International Livestock Exposition in Chicago, and only once below tenth place in the 16 years. In 1931 Shearer's team became the first judging team to win top honors at both the International and the Royal.

As head of the department 1935-1954, research programs emphasized meat production, genetic improvement of livestock and swine and sheep feeding.

In 1918, he married Mary Kelly (1915) and together they raised three children. "Phin" Shearer, as he was known by friends and colleagues, was recognized as a quiet and kind man possessing outstanding character with a deep concern for students and the search for knowledge.

Upon his retirement, he compiled a comprehensive history of the beginnings of the Department of Animal Husbandry. It was indeed probably one of his most valuable contributions to the Department and to the University, as much of the information would undoubtedly have been lost but for his tedious attention to hundreds of records.