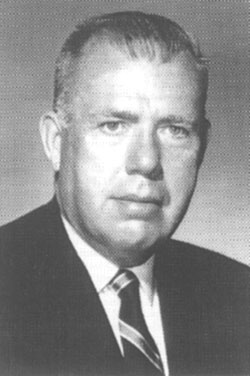 Robert Melampy was born on April 1, 1909, on a small family farm in Lebanon Ohio, on the outskirts of Cincinnati. During his early school years, Robert had a keen interest in animals and how they functioned. Upon graduation from Mason High School, he enrolled in Wilmington College, Wilmington, Ohio, and graduated (1930) three years later with a B.S. degree in chemistry. He received an M.A. degree in chemistry (1931) from Haverford College, Haverford, Pennsylvania, and a Ph.D. at Cornell University with a major in biochemistry and minors in physiology and animal nutrition (1935).

Melampy was a scientist (nutrition) with the U.S. Department of Agriculture, Beltsville, Maryland (1935-1936), where he researched the nutrition and physiology of the honeybee and cockroach. Reassigned by USDA to their Bee Culture Laboratory on the campus of Louisiana State University (LSU), Baton Rouge, he also taught courses in physiology on the LSU campus. He joined the faculty of LSU as assistant professor of zoology (1936-1942). Melampy because a nationally recognized authority on the physiology and metabolism of the honeybee and the chemistry of royal jelly. This research resulted in the publication of 22 articles in prestigious journals. On December 18, 1977, Robert married Dr. Carolyn Tiebout, Director of Testing and Guidance, Department of Psychology. Their daughter, Kathleen, was born in 1940.

War Years. With the outbreak of World War II, Melampy requested a leave of absence from LSU to join the U.S. Army as nutritionist, in the Sanitary Corps, and served from November 19, 1942, to May 5, 1946, holding the rank of 1st lieutenant, captain, and major. His relentless work ethic and attention to detail were rewarded by the Award of the Legion of Merit and by a letter of commendation. He served at Walter Reed Army Hospital, Washington, D.C.; Camp Shelby, Mississippi; Camp Gordon Johnston, Florida; Thayer General Hospital, Nashville, Tennessee; Camp Ellis, Fulton County, Illinois; 312th General Laboratory, APO 75; and 120th General Hospital, APO 1011; and was awarded the Luzon Asiatic Pacific Campaign Medal with one Bronze Star and the Victory Medal of World War II.

Melampy returned briefly to LSU as associate professor of zoology in 1946. At the urging of the eminent embryologist Carl G. Hartman at the University of Illinois, Urbana, he joined the teaching and research faculty of the Department of Physiology. In 1949, Melampy moved to Iowa State College as associate professor in physiology in the Zoology Department. Soon thereafter, he was asked to lead a newly created Physiology of Reproduction Section in the Animal Husbandry Department, a position he held until 1974.

Reproductive Biology. Melampy set rigorous standards. He established a biochemistry laboratory and small animal facility (rats, guinea pigs, mice) in Curtiss Hall. He also used dairy and beef cattle and pigs at the experiment station farms in his early studies. In 1964, a 40-acre farm near campus was purchased for an animal reproduction laboratory. Melampy's basic and applied studies in the reproductive biology of laboratory animal models and livestock species received generous extramural funding from NIH, USDA, and the Iowa Agricultural Experiment Station. His expertise in reproductive biology was recognized by membership on study sections of NIH and review panels of USDA. He taught a popular undergraduate course in animal reproduction for 27 years and was a careful mentor of more than 21 graduate students, with daily involvement in their research progress. Melampy was a familiar sight walking across the campus with a cigar that could end up on your laboratory bench, only to be discovered and reignited the next day.

Robert Melampy's research in reproductive biology focused on spermatogenesis, testicular and reproductive duct development, the role of the uterus in corpus luteum function, the physiology of relaxin, and the improved reproductive efficiency of livestock. This research was summarized in invited lectures at the Symposium on Neuroendocrinology, Miami, Florida, December 1961 (Anderson et al., 1963); the Conference on Estrous Cycle Control in Domestic Animals, University of Nebraska, Lincoln, July 1964 (Anderson and Melampy, 1965); the VIII Biennial Symposium on Animal Reproduction, University of Illinois, Urbana, June 1967 (Melampy and Anderson, 1968); and the Laurentian Hormone Conference, Mount Tremblant, Quebec, Canada, August 1968 (Anderson et al., 1969). He was recipient of the Animal Physiology and Endocrinology Award of ASAS and Honorary Fellow of ASAS and was elected Fellow of the American Association for the Advancement of Science. A special symposium was convened in the Iowa State Memorial Union, October 23, 1979, to honor Melampy's outstanding contributions to the Department of Animal Science, College of Agriculture, and the University. He became emeritus professor in 1979. After prolonged illness, he died on May 27, 1984.