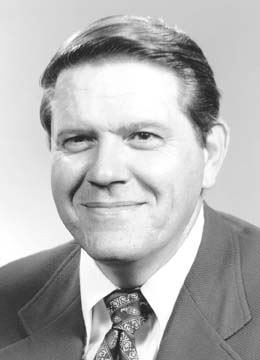 Solon A. "Bud" Ewing was the eighth department head, leading the faculty longer than any previous head and bringing it to a place of international prominence and recognition as one of the top animal science departments in the world. His efforts in developing value-added product processing and marketing, systems analyses and computer applications for refined management decisions in animal production and marketing, and molecular biology have benefited all of Iowa animal agriculture. He headed the department during a period that was absolutely explosive in terms of computer application and data availability. He was able to attract and build a quality faculty, bringing great prestige to the university. Dr. Ewing was born July 21, 1930, at Headrick, Oklahoma.

He provided significant direction in both concept and development of several centers and facilities at Iowa State University including the Meat Laboratory, the Meat Export Research Center, the Swine Nutrition and Management Research Center, and the Iowa Livestock Extension Initiative. Additional efforts include programs in the Linear Accelerator Facility, the National Swine Research Center and major research and teaching facilities to serve the livestock and animal product industries.

He and one brother were raised on a grain and livestock farm in southwestern Oklahoma and received a B.S. degree in animal husbandry from Oklahoma State University (OSU) in 1952. That same year, he married Dorothy Folks and served as Lieutenant in the U.S. Air Force 1952-1954. Returning to OSU, he obtained the M.S. degree in swine nutrition in 1956. He was then an instructor in animal science and conducted research on nutrient requirements of beef cattle and swine, earning the Ph.D. degree in ruminant nutrition in 1958.

During the 1980s, as logos came to be identified with organizations, Dr. Ewing returned from a meeting with a sketch of a microcomputer flanked by an Erlenmeyer flask that he had drawn on hotel stationary. The logo was expanded by Dr. R. L. Willham of the Animal Science faculty to include the livestock species on the screen. The logo is still in use today.

During his nineteen years as Head of Animal Science at Iowa State, Dr. Ewing established the first animal science faculty positions in the US in enterprise management systems analysis adapted to personal computer technology; established the first molecular biology faculty positions and programs in Animal Science at Iowa State University; provided administrative leadership for the first importation of Chinese swine for research in the USA as a joint effort among ISU, the University of Illinois and the USDA. He established priority and secured funding for the development of the Swine Nutrition and Management Research Center at Iowa State, and secured funding for major redevelopment of facilities at the Beef Nutrition Research Center, Swine Breeding Research Center, the Animal Science Teaching Farm and the Poultry Research Center. It was Ewing's leadership that secured first priority by Iowa State and the State Board of Regents for the funding and construction of intensive livestock and laboratory facilities as an addition to Kildee Hall for teaching and research, and conversion of the old Meats Laboratory to an animal evaluation and teaching facility. He secured legislative funding for the Iowa Livestock Initiative as a pilot program for increasing effectiveness of Extension Programs in Livestock Management in Iowa, and he developed the original proposal that resulted in establishment of the Agricultural Products Research Center at Iowa State University.

Dr. Ewing was recognized with the Animal Science Hall of Fame Award in 1979, the Gamma Sigma Delta Award of Merit for Distinguished Service to Agriculture in 1986. In 1990 he was designated Distinguished Alumni in Animal Science by Oklahoma State University and received the ISU Faculty Citation that same year. In 1991 he was named Honorary Master Pork Producer by the Iowa Pork Producers Association and Fellow of the American Society of Animal Science. In early 1992, Dr. Ewing's portrait was hung in the Iowa Cattlemen's Hall of Fame Gallery at the Association's headquarters. He is a member of the American Society of Animal Science, the Dairy Shrine Club, Alpha Zeta and Gamma Sigma Delta.