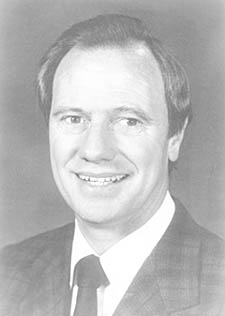 Thomas McNee Sutherland was born in Falkirk, Scotland May 3, 1931. He grew up on a Scottish dairy farm doing all types of farm work, including cropping and livestock husbandry on a 50-cow mixed dairy farm. He received his B.Sc. in Agriculture from Glasgow University, Scotland, in 1953 and a post-graduate diploma in animal husbandry from Reading University, England, in 1954, doing research on pigs. He applied to graduate school in animal science, was accepted and received his M.S. degree in 1956 from Iowa State University. That same year year he married Jean Ann Murray of Ames. In 1958, he completed his Ph.D. degree, "Effect of inbreeding on size and type of Holstein-Friesian cattle," obtaining both graduate degrees working on dairy cattle and pigs with major professor Jay L. Lush. Sutherland took a position at Colorado State University, Fort Collins. An older Lush student, Dr. Stonaker, picked Tom to come there to start a mouse laboratory to answer difficult question sposed by livestock breeding projects. He taught reproductive physiology. He was honored early for teaching excellence and continued research in feed efficiency, receiving the American Society of Animal Science Distinguished Techer Award in 1975 and the Harris T. Guard Distinguished Service Award for Teaching from Colorado State University in 1976. He then served world agriculture in Ethiopia as Director of Training, International Livestock Center for Africa, Addis Ababa. In 1983, he became Dean, Faculty of Agricultural and Food Sciences, American University of Beirut, Lebanon. 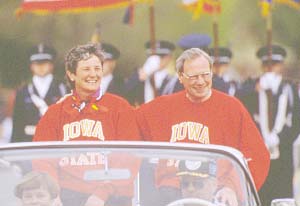 Sutherland gained world fame as a hostage of the Islamic Jihad from June 9, 1985 to November 18, 1991. During his captivity, Iowa State University remembered him and Terry A. Anderson (JLMC, 1974), a journalist with AP in Beirut and also a captive, with a ceremony at the Campanile where the bells tolled. The closing words of the second one in 1987 were, "We pray that soon we will repeat again with Tom from his Bobby Burns, 'My heart's in the highlands, wherever I go', as we know he has taught his captors, with great love!" His wife Jean and her well-known father, Dr. Wm. G. Murray, retired-but-still-active economics professor and political figure at that time and the founder of the Iowa Living History Farms in the seventies, were a formidable team who both traveled far and wide urging release of all the captives, and kept the latest information on the front pages and television news for those 6+ years of undeniable suffering for captives and families. Although captured separately, Sutherland was held captive along with AP correspondent Terry Anderson. Anderson wrote a best-selling book about the captivity, Den of Lions. Sutherland returned to Iowa State in May 1992 and was honored at VEISHEA, he and Jean leading the famous parade. Later, he and Terry Anderson returned to campus together, as shown in the photo. In 1992, the Animal Science Department presented Sutherland with a "scherenschnitte," a German word that describes a paper cutting that celebrates a particular event. "A World Of Opportunity" is shown below.

Upon his release, he and his wife spoke out in force for peace and a world where agriculture can relieve hunger and suffering. He is now retired in Fort Collins. Tom and Jean have three daughters and numerous grandchildren.

The scherenschnitte, created by Ames artist Linda Emmerson, deals with their time on the Iowa State campus. The ceremony of the presentation to the Sutherlands was held in May 1992 in the Jay L. Lush auditorium of Kildee Hall. Lush was Tom's major professor for both his M.S. and Ph.D. degrees, and knew Jean as a child since the Lush's were neighbors of the Murray family on Oakland. The backdrop for the picture shows the animal breeding graduate students who competed fiercely with Tom, yet shared their insights as did Tom and grew together, the essence of the graduate student experience at Iowa State. At the center of the picture is Curtiss Hall where the studying was done in Room 18-N by R. J. Cooper, Sutherland and R. L. Willham. On the right is Sutherland, John Wilson and Charles Smith sharing Scotland with the community. The three Murray children whose silhouettes were created in the 1940s by ISU artist-in-residence Christian Peterson leads to Lake LaVerne. The Murray home on Oakland where Jean was raised is pictured in the lower left corner, then Collegiate Presbyterian Church where Tom and Jean met in the choir and were married in 1956, and the Pi Beta Phi sorority house where Jean was a member during her collegiate years. The scherenschitte was a birthday present to Sutherland at the time of his return to the campus.

"We Have Not Forgotten"

On June 9, 1985, In Beirut, Lebanon, Dr. Tom Sutherland disappeared on his way to work as Dean,
Faculty of Agricultural and Food Sciences, at American University. About the same time, Terry A.
Anderson ('75, JLMC), an AP reporter in Beirut, was also kidnapped and held captive.

In 1987, Mrs. Jean Murray Sutherland ('56, English) headed an effort to free her husband and other
American hostages held captive by Islamic Jihad. These Americans were not freed until November 18,
1991. Dr. William G. Murray (left) was the father of Jean Murray Sutherland. Speaking is a
representative of the ISU Alumni Association. The Alumni Association strongly supported the efforts
to help free the captives.

Jean Sutherland speaks in front of the ISU campanile at a 1989 rally. By this
time, Jean was getting a great deal of national attention regarding the captives.
Many felt the US State Department was not aggressive in demanding that the
captives be freed.

A Scottist bagpiper honors Dr. Sutherland's Scottish heritage. Tom came to ISU in 1954 as a graduate student in animal science and received an M.S. degree in 1956. He went on the receive a Ph.D. in 1958 working under Dr. Jay L. Lush on dairy cattle and swine.

Dr. W. G. Murray speaks at a rally on the ISU campus. As well as being the father-in-law of Dr. Tom Sutherland, Dr. Murray was a well-known figure all around Iowa. A Professor Emeritus of Economics, he founded Living History Farm and also ran for governor in the 1970s. He led the Ames effort on behalf of the hostages and was very active in keeping Iowans informed of hostage developments. In frail health by 1991, it was ironic that Dr. Murray died unexpectedly the day before all the Islamic Jihad hostages were released, November 19, 1991.

Dr. Richald L. Willham, Animal Science faculty, speaks at the 1987
rally on behalf of Tom. Willham and Sutherland were graduate students together.

Dr. Michael Warren, Anthropology faculty, ties a yellow ribbon around a tree before the
rally. This symbol of remembrance for POWs and hostages became popular during the 1980s.
At the time of the release of the hostages, the Islamic Jihad stated that the hostage situation
had not accomplished what the Jihad had wanted.

It's now 1992 and the hostages have been freed. Dr. Tom Sutherland speaks
to a crowd on the steps of Beardshear Hall during VEISHEA. He and Jean
were the VEISHEA parade marshals that year. What a happy occasion!
Dr. Sutherland is now retired from the Colorado State University animal science faculty.