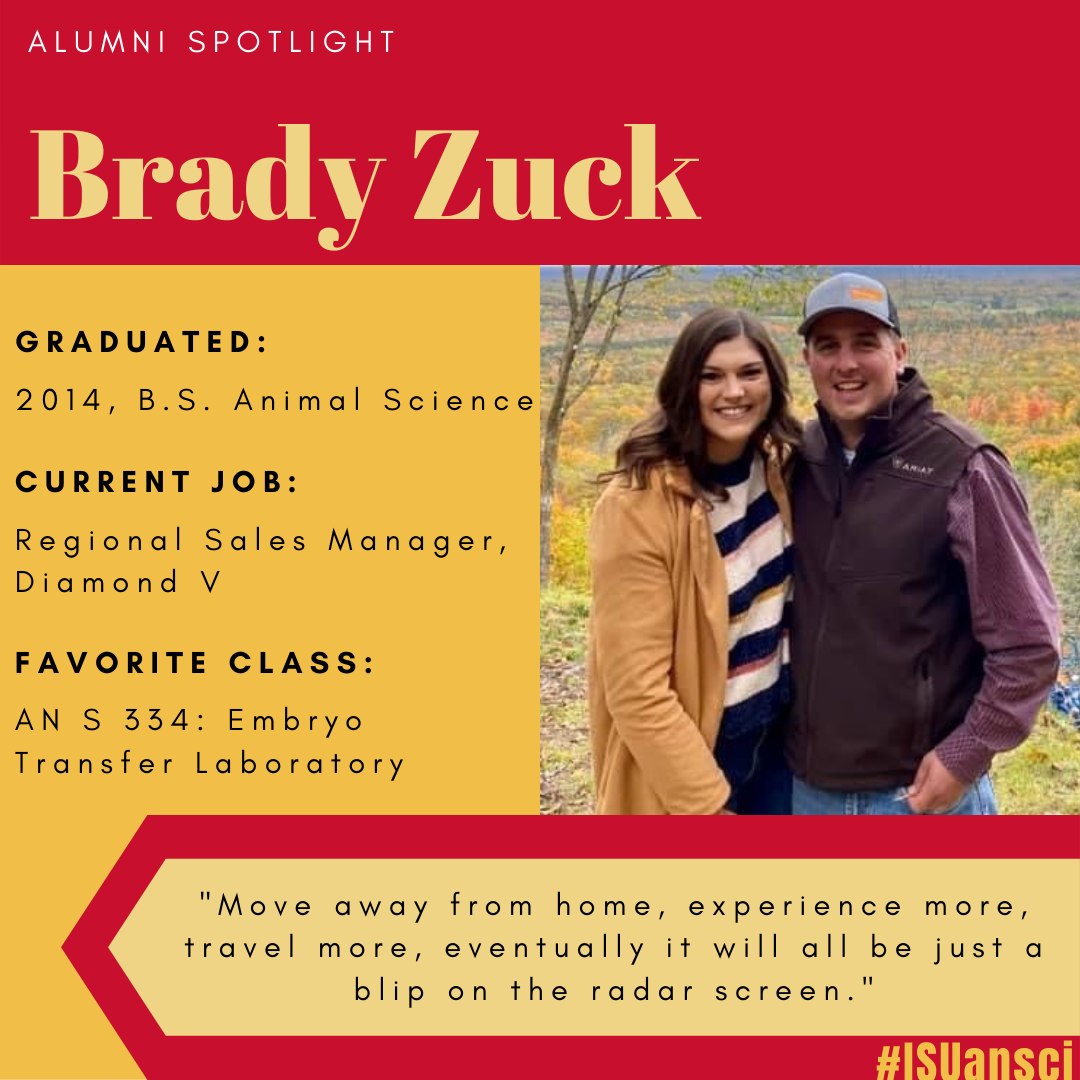 Brady Zuck graduated from Iowa State University with his Bachelor of Animal Science degree in May of 2014. During his time at Iowa State, Brady kept a busy extracurricular schedule. After joining Block and Bridle his freshman year, Brady became the club’s president in 2013 and had the opportunity to lead the club through hosting the national convention on the Iowa State’s campus. Brady was also a member of Alpha Zeta fraternity and was an animal science peer mentor for freshman in the major.

Coming from the small town of Ladysmith, Wisconsin, Brady said his time at Iowa State was invaluable. Here he learned to be independent and grow comfortable with being a little uncomfortable. Since Brady came to Iowa State knowing very few classmates, he quickly learned how to be the new guy, developing his networking skills and building connections that are still benefiting him today.

After Iowa State, Brady spent six and a half years with Elanco, starting with a role on the Solutions Development Team. He then held a Beef Sales Territory role, followed by a transition to the Channel Partners Team. It was during this transition that he encountered one of the most meaningful moments in his career. Brady explained that when he was considering taking the promotion at Elanco, which included a more challenging opportunity and work with bigger customers, he felt like he wasn’t ready. However, he had close mentors supporting him and believing in him. It was through this experience that he is now able to share the advice to be confident in yourself and take challenges when they come. Brady is currently working for Diamond V, an animal feed additives company, as a Regional Sales Manager covering Wisconsin, Minnesota, Iowa, and South Dakota. Through this position he gets to work with feed mill managers, feed mill sales teams, as well as large companies like Purina. Brady provides product support and aligns value added services, helping to ensure animals live more healthy days.

When reflecting on his time at Iowa State University, Brady described the animal science department and campus itself as a special place with staff that create an outstanding environment for growth and development. He went on to say that after participating in many recruitment activities and interviews for his company, he can truly say that Iowa State molds you into the candidate a lot of companies want to hire.

“Don’t be afraid to move away from Iowa when you graduate. Get experience, travel more, in the end it will be a blip on the radar screen and one you will be grateful for having.”