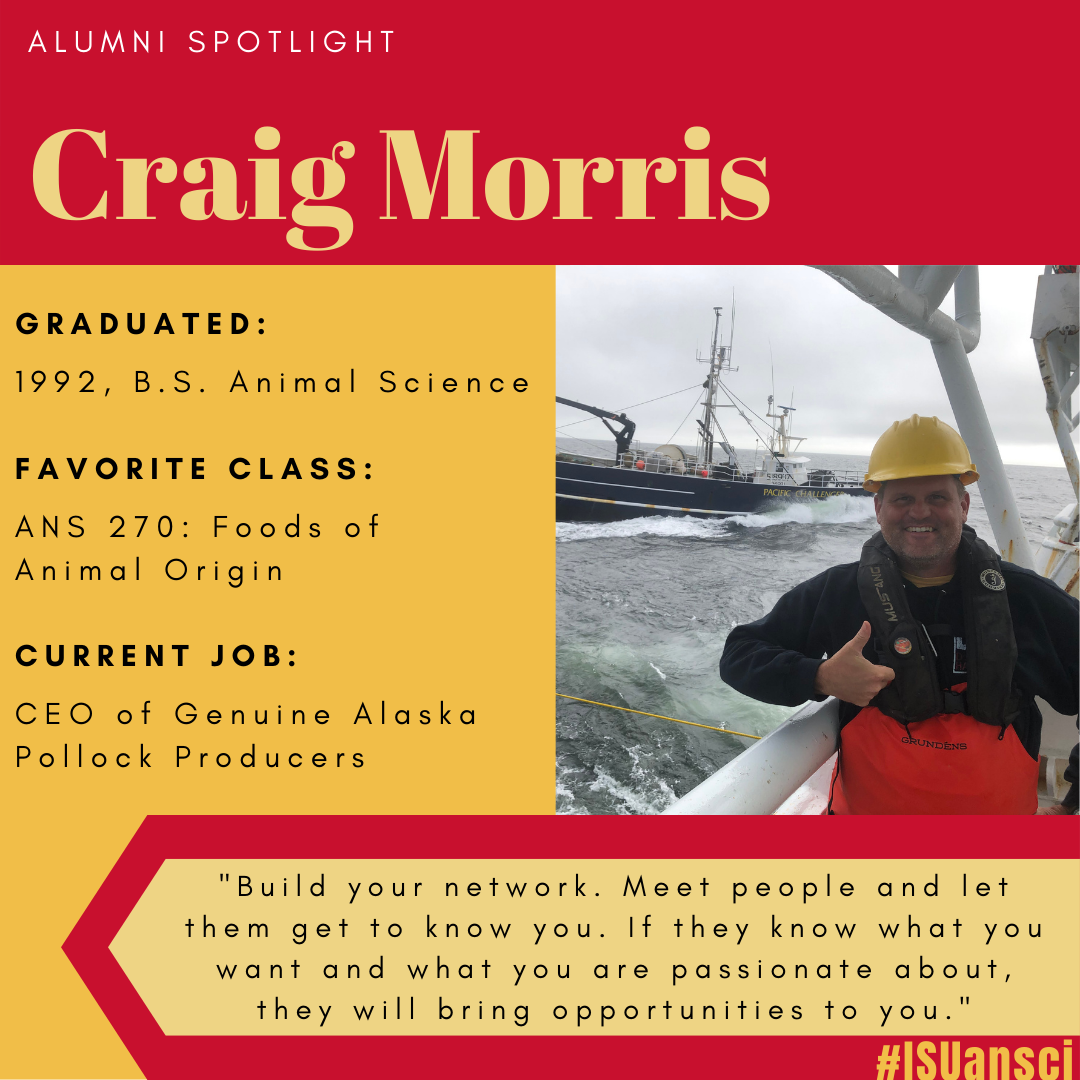 Craig Morris’s time at Iowa State has played a foundational role in his success today. Graduating in 1992 with his degree in Animal Science and a Pre-Veterinarian distinction, Morris says the things he learned while pursuing his undergraduate degree did a phenomenal job preparing him for his future career.

Morris grew up in his family’s meat company and wanted to be a chef, but after a push from his mom and a visit from an Iowa State recruiter, he decided to attend college and become a veterinarian. However, that quickly changed. After taking Animal Science 270 – Foods of Animal Origin and getting to know Professor F.C. Parrish, Morris got the urge to get started in meat science and has been in the protein business ever since.

After receiving his bachelor’s degree, Morris attend Texas A&M where he went straight into working on receiving his PhD. Here he came up with his own research project and had to find his own funding. Craig developed a rapid test that uses an immunoassay to determine if roast beef has been cooked to 145°F, which has now been patented.

Now, Morris is the Chief Executive Officer at Genuine Alaska Pollock Producers which is the marketing arm of Alaska Pollock Fishery. He works to build awareness for the product and build demand for the pollock. When asked how Iowa State prepared him for this role, Morris replied, “I gained leadership skills through the activities I was involved in. Iowa State is a world-leader in meat science and the reputation of the faculty puts pressure on you to make a name for yourself and bring acclaim back to Iowa State.”

His involvement with the Block and Bridle Club, Alpha Zeta, working in the meats laboratory, and competing on the judging teams gave him the opportunity to network, take on leadership positions, and learn how to lead a team. Something he is proud of is his role as the chair of the summer sausage and cheese committee for Block and Bridle. He was tasked to make about 2,000 pounds of sausage, but Professor Marvin Walters challenged him to make 10,000 pounds. Morris struck a deal with Walters, with Walters agreeing to buy all of the leftover sausage from the 10,000 pounds Craig would make. At the end of the day, Marvin Walter ended up buying 8,000 pounds of sausage from the Block and Bridle Club.

When asked if he had any advice for current students, Morris said, “Build your network. Meet people and let them get to know you. If people know what you want and are passionate about, they will bring opportunities to you.”

He continued, “I don’t know if many people from Iowa know how well-respected Iowa State is internationally and around the country. Everyone should be proud to be in this school because it has a wonderful reputation and so many opportunities for students.”