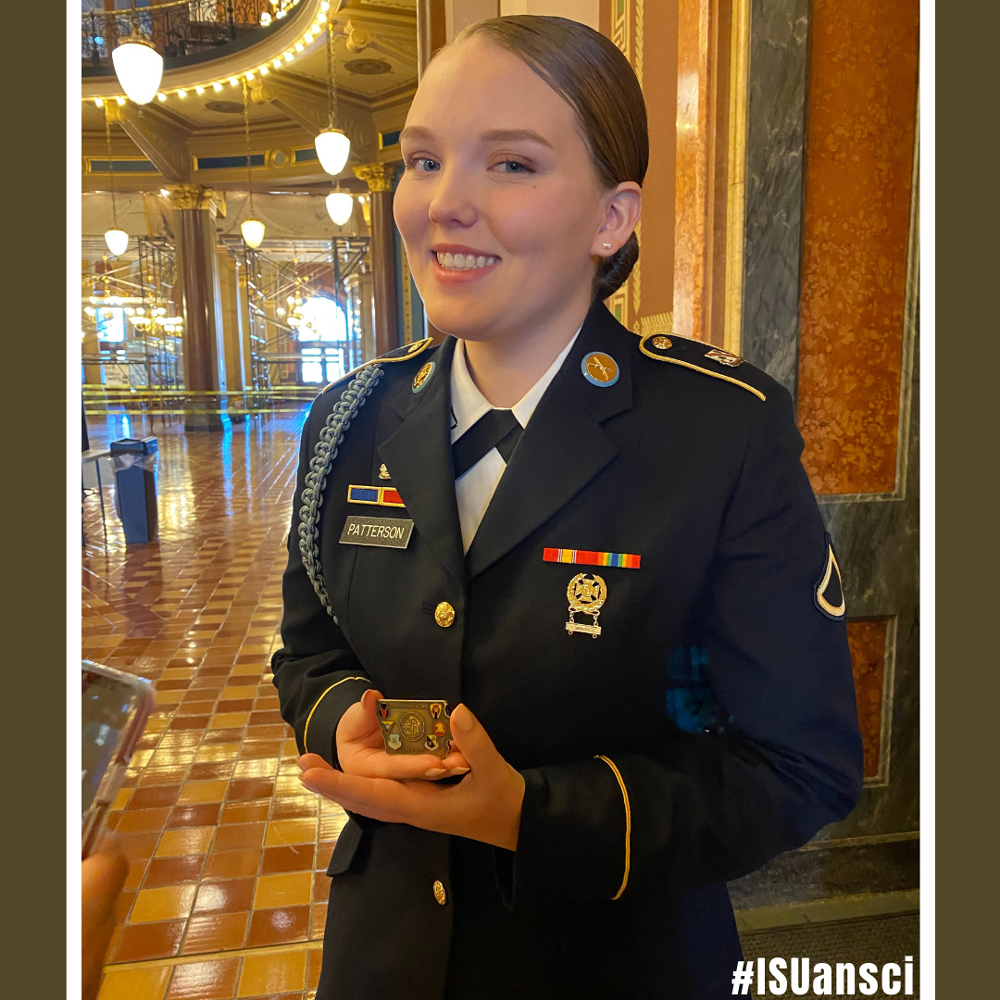 When Taylor Patterson is not on campus excelling in her studies here at Iowa State University, she is out making history.

During her senior year in high school, she committed to a 6-year contract with the National Guard intending to enlist as an Infantry Soldier upon graduation. After completing the entire 22-weeks of basic training at Fort Benning in Georgia, Taylor found herself the first women to successfully be enlisted as an infantry soldier in the Iowa National Guard. Since the U.S. Army opened combat arms positions to women five years ago, 22 women in Iowa have attempted the vigorous training required, however Taylor was the first of them to successfully complete it. Taylor described her overall experience to be a positive one. While none of her team leaders had prior experience working with a female in the field, they were very open and supportive of her.

Taylor’s story starts like many, coming from Ankeny, Iowa her original plan was to get a little further from home than the 30 minutes to Iowa State University. She found herself dead set on attending South Dakota State University, until she toured Iowa State’s campus for the first time in the fall and couldn’t pass up the outstanding program it offered in her major of choice, animal science.

In between drill weekends Taylor is focused on her studies in animal science and enjoys her part time job as a waitress. Her favorite class so far has been Jennifer Bundy’s AN S 110 - Orientation in Animal Science, stating that she enjoys learning about the industry she wants to go into as well as the positive energy Dr. Bundy brings into the classroom. She is also happy to say that communicating and working with her professors has been a positive and supportive experience when conflicts due to her National Guard commitments arise. After graduation Taylor will serve at least 2 years in the reserves and then plans to follow her passion for livestock and use her degree in a position within the beef or dairy industry.

When asked if there was an achievement that she was most proud of she responded that while she is incredibly proud to be the first women in Iowa to successfully be enlisted as an infantry soldier she is just as proud, if not more so, that she just made it through, explaining that there were times she thought she might not make it. Taylor went into this journey to prove to herself that she was stronger than she or anyone else thought, and she did just that.