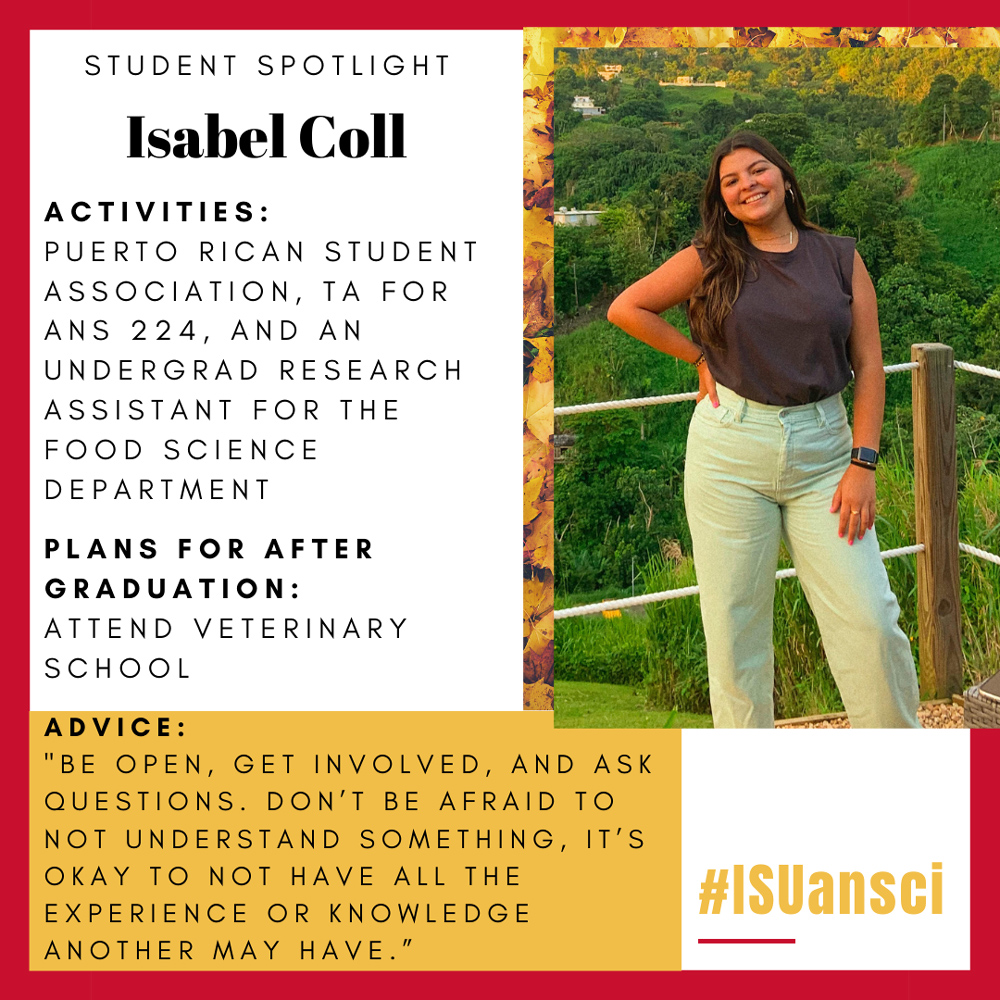 Making the decision to attend a university more than 2,000 miles away from her home in Guaynabo, Puerto Rico was enough to make Isabel Coll more than a little nervous, but she said that all went away after her first day on campus. Coll first stumbled upon Iowa State University at a college fair hosted near her hometown in Puerto Rico, where the hands-on animal science experiences and the Veterinary Program drew her in. Coll made the decision to attend Iowa State University before ever stepping on campus. The first things she noticed during orientation was the welcoming environment, close knit campus, and the desire professors had for their student’s success. Not coming from a farm background, the abundance of hands-on experience and knowledgeable professors the college offered was invaluable to her.

Coll recently completed her junior year at Iowa State University majoring in Animal Science and has seemingly found the balance between classes and extracurricular activities. She is an active member of the Puerto Rican Student Association, an Undergraduate Research Assistant for the Food Science Department, a TA for AnS 224 Companion Animal Science, an AnCy guide for the Animal Science Department and works in the Iowa State Veterinary Histology Lab. Coll explained that each of these activities and jobs provides her with more real world and hands-on experience that will get her where she wants to be in the animal industry.

She is excited to spend her summer with the ISU College of Veterinary Medicine as one of eight undergraduate interns. Through this opportunity Coll will spend ten weeks shadowing veterinarians and gaining experiences in different fields each week. She shared that she is excited to start her summer in primary care, moving on to emergency and critical care the following week.  Coll is looking forward to gaining more experience in every field, especially large animals, but is also excited to continue gaining connections and leadership experience through the program.

When asked if there was an achievement that she was most proud of she responded by saying, “Adapting. I am most proud of my ability to adapt and make the decision to come here.” She continued to explain that not only was there a huge difference in the weather but the culture as well. Coming to Iowa alone and being confronted by the many differences and distance from home was enough to make her question her ability to succeed and stay here. But after some perseverance she is proud to say that she has continued to not only believe in herself but to succeed even in the face of adversity.

Coll plans to attend veterinary school upon completing her undergraduate degree in hopes to eventually specialize in surgery and open her own clinic. While the ISU College of Veterinary Medicine is her first choice, she is also reviewing others, narrowing down her options for the ones she will apply for. Her three younger brothers and family back home will be cheering her on from Puerto Rico as she works through completing her undergraduate degree and applying for veterinary school.

“Be open, get involved, and ask questions. Don’t be afraid to not understand something, it’s okay to not have all the experience or knowledge another may have.”