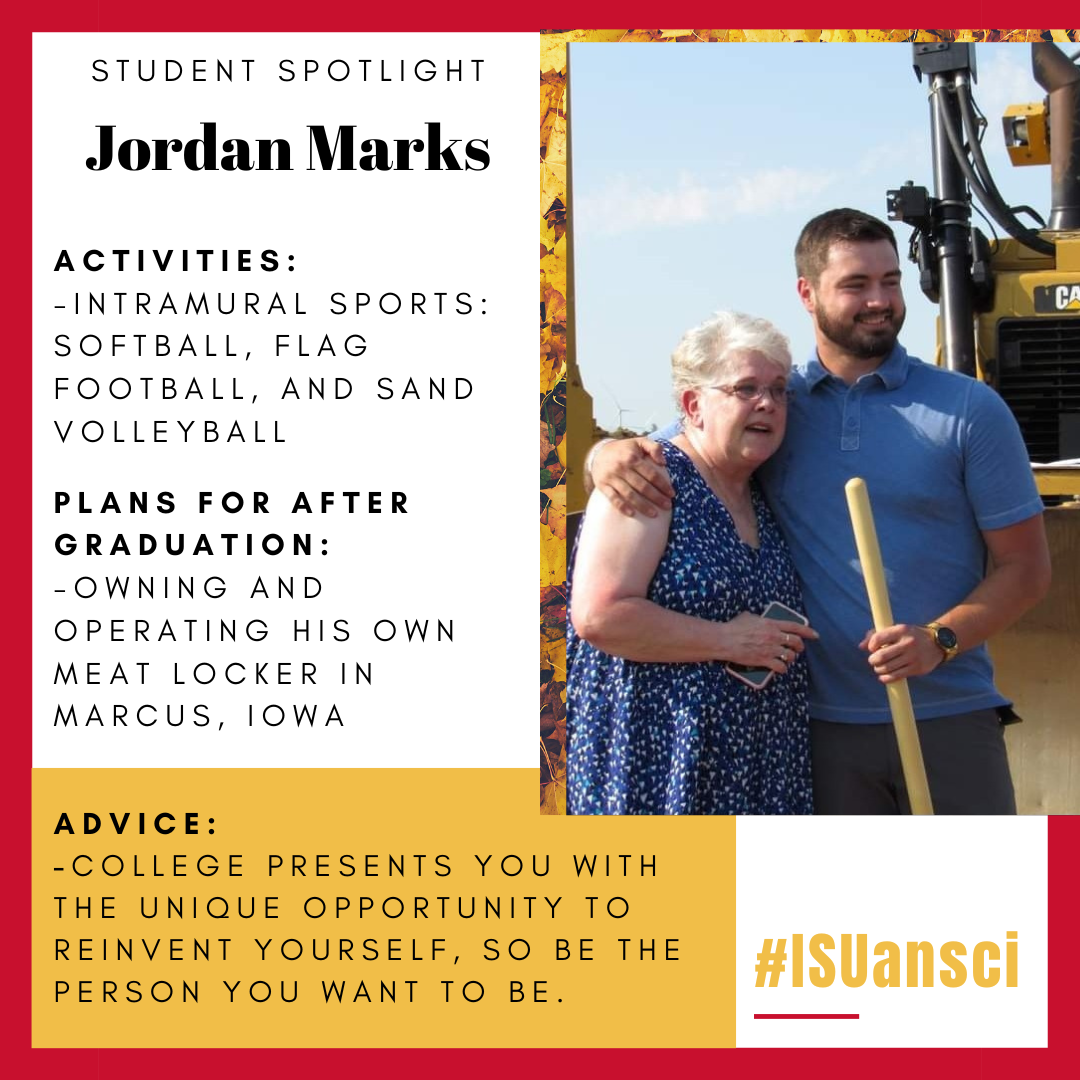 It's not every day that a college student receives a $1.5 million loan to construct their own business before they even graduate. This may not be the common path to take, but it is exactly the road Animal Science Senior Jordan Marks is on.

Marks' passion for the meats industry started when he was young, working in his uncle’s meat locker located in Remsen, Iowa, since he was the age of 14. As he approached his senior year of high school Marks started to consider his future career, looking at jobs in welding and construction, but nothing seemed to fit. When the idea of building and owning his own meat locker, Marks said that “it just clicked and I instantly knew that that was what I was going to do.” He decided that the difficult journey to reach his dream would be even harder without a college degree by his side.

Marks explained that the decision to attend Iowa State University to major in animal science was an easy one to make. He appreciated the quality of the programs offered, as well as the fact that it was less than three hours away from home, allowing him to work at his uncle's meat locker on his weekends home and over Christmas break. It comes as no surprise that Marks' favorite class has been ANS 360 – Fresh Meat Science and Applied Muscle Biology. He enjoyed going over the various cuts and processes related to fresh meats. Marks continued by saying, “the class brought up a lot of topics that have been right in front of me, but I have never even thought to consider,” describing the science behind meat products.

Marks successfully received a loan to construct and start his own meat locker in Marcus, Iowa  for $1.5 million in August of 2022. The floor plans Marks’ dad created by combining the best part of the lockers he has visited in his job as Meat Locker Inspector for the state are well underway and are set to be done by May 2023. His dad is also helping him oversee the construction process back home while he finishes his last year at Iowa State University.

Marks expressed his excitement to graduate and start his business, sharing that if he graduates on a Sunday, you can find him working on that Monday. It is also safe to say that the small town of Marcus, Iowa is excited to see a new business come to town with Marks's first few months after his opening date already booked up. Marks shared his appreciation for his father’s help in the process of achieving this goal stating, “None of this would have happened if not for him.”

When asked if there was an achievement he was most proud of, Marks responded, “For myself, as a 21-year-old to get a 1.5-million-dollar loan to start my own business and be only a semester away from graduating college, that is huge.” He further explained that as a first-generation college student, he could not have done any of this without the support and encouragement of his family. Marks looks forward to the moment he walks across the stage to receive his degree, stating that “it will be a great feeling to look out and see my entire family there.”