This is the winning 1901 livestock judging team of H.O. Tellier (top left in the picture), E.H. Hall (lower left), R.J. Kinzer (center), F.B. Kennick (upper right), and J.J. Hoover (lower right). Kinzer became an instructor, went to KSU, and then on to be the American Hereford Breed Association Secretary. The famous J.A. Spoor Trophy - the bull in defiance stance - sculpted by Isadore Bonheur resides in Kildee Hall. The original sculpture cost was $700. The magnificent trophy was awarded the ISU team, which won first honors in judging horses, cattle, sheep and swine at the Inter-Collegiate Live Stock Judging Contest, an event of the International Live Stock Exposition in Chicago Nov. 30-Dec 7, 1901 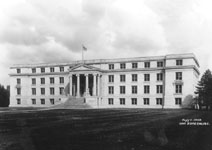 A 1909 picture of what would become Curtiss Hall. Animal Husbandry was located on the first floor in 1910 and moved to the ground floor in 1952 so Dean Curtiss could supervise the department since his office as dean was on the same floor - fireplace and all! The department occupied the north half of the first floor. Dairy and poultry husbandry had the first two rooms on the east side of the south corridor. Extension personnel were in the southeast corner room. The agricultural library occupied the southwest corner room. Additional space became available by the removal of the library to the new college library in 1925. Thereafter, extension was housed in Morrill Hall, former used as the library. Built of Bedford limestone, Curtiss Hall stands as a tribute to the continued faith of Iowans in the "Democracy's College." 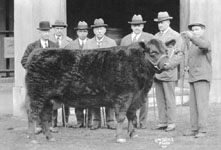 The prize bull Mah Jongg is proudly shown off by (right to left) George Edwards, the herdsman at ISC; the judge, J. Egerton Quested of Kenth, England; E.N. Wentworth, the International Ringmaster; John Clay, the Commission Man; H.H. Kildee; and Dean C.F. Curtiss. Note the spats on Curtiss and the English judge!

The year 1925 belonged to Dean Curtiss! His portrait was hung at the Saddle & Sirloin Club in Chicago, and the ISU steer Mah Jongg was Grand Champion. The judging team placed only 5th. The dean was a stockbreeder on his 330-acre Rockwood farm near Ames. He was director of the International Livestock Exposition for many years and in 1911 was the most published animal husbandry researcher. The dean was a dapper Victorian gentleman. His tradition lives on as the professors of agriculture who on the frontiers of science are given the title of C.F. Curtiss Distinguished Professors of Agriculture. 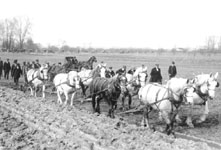 This photo shows a plowing demonstration with a 3-bottom plow (42 inches wide, 8 inches deep) using 4 teams or 8 Percheron horses. These demonstrations were part of the extension effort and were held all over the state. "Field Days" are still held at the research farms around the state. 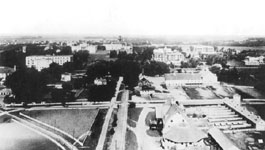 The Agricultural Experiment Station barns were located where the power plant is today. The photograph shows the many animal pens and barns. This aerial picture also details so many other buildings lost to fire and old age, while Curtiss and Beardshear Halls stand stately. The railroad line that divides the picture in half at the bottom used to service the "Dinky," a small train that ran from The Hub on campus to downtown Ames. The sidewalk on the west side of the power plant, crossing the intersection and continuing along the south side of Hamilton Hall were where these tracks once stood. This railroad was still operating in the early 1930s. 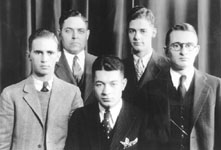 But the significant event in corn belt agriculture was the formation of a hybrid seed corn company called Pioneer by Henry A. Wallace (1910). The adoption was swift and by 1934 uniform fields of hybrid corn blanketed Iowa. This did not go unnoticed by animal breeders. C.W. Knox of poultry husbandry established inbred lines of chickens that served as the foundation for much subsequent poultry breeding and immunogenetics work! 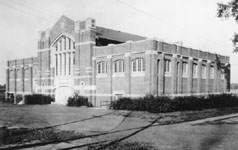 The Meat Laboratory was the second one on a land-grant campus. In 1915, the department began developing plans for teaching herd barns on the northeastern corner of the campus, but World War I stopped activities. The Meat Laboratory was completed in 1918 and boasted a judging arena, meat demonstration facilities, slaughter floor, and coolers. At the time of its completion, the lab was sometimes referred to as Helser's or Pew's Cathedral because of its church-like architecture. M.D. Helser, the meats professor, was a lay preacher and attended Collegiate Presbyterian Church. The two buildings were designed by the same architect. 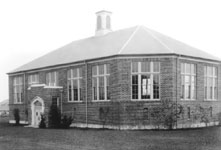 The Livestock Pavilion was built in 1925, and many former students, especially judging team members, remember it fondly. Until the mid 1980s, this structure was used daily for laboratory classes involving stock until it was torn down in 1996 to make way for the Kildee addition. 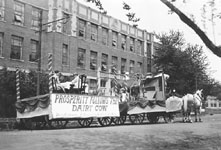 The departmental clubs have participated in Veishea since its inception 1922. Displays to promote the clubs and the department, food booths, and sometimes floats for the parade were done. This tradition is still very important to the Animal Science undergraduate clubs with the student clubs vying for top honors with their displays in the judging. The 1925 sweepstakes float was Dairy Husbandry. 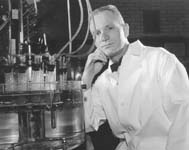 One of the most important and far-reaching events in the department in the early 1950's was the patenting of defined levels of diethylstilbestrol (DES), a growth-promoting hormone, to feed beef cattle for improved growth and efficiency. The saga includes how Wise Burroughs found that quality clover hay contained estrogens that enhanced growth, and how he, by studying the literature on DES, determined the levels to produce the desired effects, but not the negative ones. The work with the Iowa State College Research Foundation to secure the patent, the feud with colleagues at Ames and Purdue, the announcement at Cattle Feeder's Day in 1954 that turned the feed industry upside down, the struggle to secure FDA approval, the involvement of President Hilton in the licensing done with Lilly, and the phenomenal use of Stilbosol by the feeders make a story worthy of the book about it by A.I. Marcus in 1994. The events changed the way new technology was utilized and controlled by the Food and Drug Administration. Eventually DES was banned in 1979. A portion of the proceeds from the patent built Lush Auditorium, and the use of DES enhanced the profitability of cattle feeding. 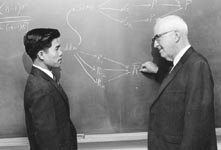 In 1959, Jay L. Lush was asked to study the genetic effects of irradiation in swine by the Atomic Energy Commission. The study was concluded in 1968. Today, the auditorium of Kildee Hall bears his name. 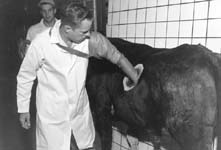